5 Tweets Kanye West Should Have Chilled On

Kanye West Has To Chill…Sometimes

I love Kanye West and he really is a creative genius BUT Kanye, sometimes you gotta chill. I was right there just like the rest of y’all watching Kanye drop tweet after tweet going in on Wiz Khalifa. And while it was entertaining I was so confused as to why Kanye was so mad. Clearly we were all wondering the same thing, Kanye starts to tweet about his new album (in which he keeps changing the damn name) and then Wiz Khalifa tweets

Hit this kk and become yourself.

Before we can refresh our pages quick enough Kanye West has already tweeted a thesis on Wiz, the problem is Wiz was talking about weed and not Kim Kardashian. But of course Kanye West being Kanye West takes things too far. Here are five tweets Kanye should have just chilled on… 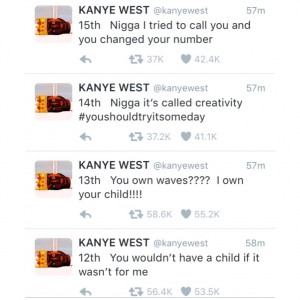 I was here for Kanye being Kanye until he spoke about Wiz and Amber’s son…not cool. Even if Kanye didn’t have children he should understand that you don’t bring someones child into your little twitter hip hop beef. But Kanye actually does have children and he still thought it was cool to talk about Baby Bash (thumbs down). Next time you have a twitter beef Kanye chill on tweeting about people’s offspring fam.

Bruh you are married with kids, let Amber Rose go! You have done multiple interviews about how Kim is the love of your life and even stated how many showers you had to take before being with Kim. But every time I look up Amber Rose’s name is sitting on the tip of your tongue. Leave Muva alone, because every time you say something about her she claps back and you look crazy. (Have you hit the #FingersInTheBootyAssBitch hash tag) Chill on tweeting about Amber, you always look bitter. 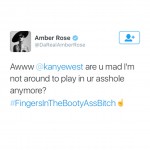 Amber Rose Claps Back At Kanye

I don’t know if anyone missed that tweet, but Kanye definitely said that he tried to call Wiz but he changed his number. Why were you trying to call Wiz? And even if you were trying to call him exactly what were you going to say to him once you got him on the phone? “I’m sorry I spoke about your child, can we friends.” Kanye, next time you go off on twitter please don’t let us know you tried to call the person and they changed their number.

Kanye, I don’t know what type of crazy energy drink you drank before tweeting but after it wears off you can’t just say, “I want peace and love.” Not after you talk about someone’s kid, there really isn’t a way on twitter to come back from that. I would say maybe you should call Wiz but we all know how that went lol.

At this point you have tweeted everything to try and diminish who Wiz is as a rapper and then you make a call for peace. Once none of that seems to work (go figure) you delete all your tweets. Now maybe Ye had a change of heart, I’m sure he did but deleting is never the way out. Everyone has already made their screen shots and it was all over the internet by the time he refreshed his page to call for peace on the last tweet. Kanye, if you are going to post and delete just write the tweet down on paper before tweeting it. 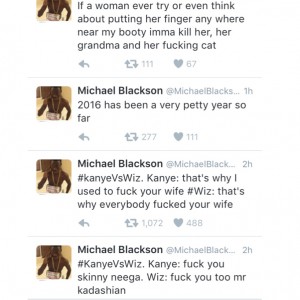 Kanye, we love you but sometimes you just gotta chill bruh.