Brandy stars in new sitcom “Zoe Ever After”

Are we feeling Brandy in #ZoeEverAfter ?

Last night was the premiere of “Zoe Ever After,” starring singer/actress Brandy Norwood. Brandy who is known for her vocals made the transition some time ago into the acting world. Brandy is no newcomer when it comes to starring in a sitcom, (y’all remember Thea and Moesha). More recently she starred as Chardonnay on BET’s sitcom “The Game.” Now Brandy is playing Zoe a newly single woman after getting a divorce from her high profile husband Gemini who is a boxing champ on the show. Zoe and Gemini share a son who is old enough to know mommy and daddy are no longer together. 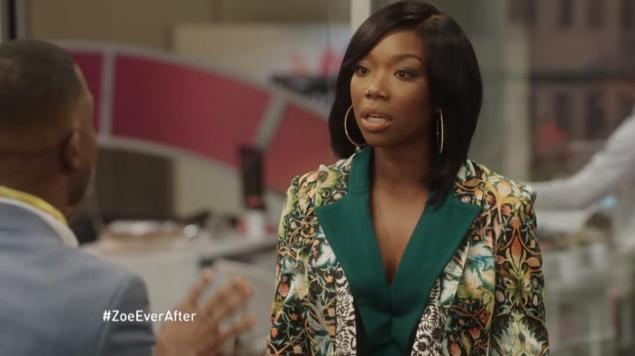 In the pilot episode we see Zoe and Gemini try rekindle a new flame but sometimes flames are meant to stay burnt out. I thought the first episode was surprisingly funny, I didn’t quite know what to expect but Zoe has spunk and I like that she is a career woman that wants to make a name for herself. Whoever is on wardrobe and hair (high five) y’all have my girl Brandy looking lovely (the entire show I couldn’t stop looking at Zoe’s green pants suit). I do think that the time slot might cause a problem, mainly because it’s late and people may forget that it comes on. I know they can’t move it up because FOX hit show Empire airs at 9pm (we not giving up Cookie for nobody). I really would like to see how the first season plays itself out, for now I would say that I will be tuning in next week…Zoe is about to get her groove back!

Previous: Wanting My Own Coffee Shop
Next: #ShootYourShot Accomplishing your 2016 goals