Black writers and their “diverse” writing

I recently stumbled upon an article entitled, “I write the Accent: A Black Writer Considers Urban Romance” by way of listening to a podcast on, “Girl Have You Read…”  Girl Have You Read, is a site for black people looking for books with black people in them, keeping it simple. It’s the answer when you want to read black literature but don’t know where to start or simply don’t know where to go find good books written by black authors starring black characters. They really do exist…shocker. The podcast opened with book authors Christina C. Jones and Alexandra Warren (creators of Girl Have You Read)   talking about book pricing and how much one would pay for a body of work that was featured online (e-book format). As the conversation went on there was a shift and the article came into play, but wait, back up, before I listened to the podcast I read the article first. I rolled my eyes because I was now about to go toe to toe with not one but three black women who believed in the idea that because you are a black writer you have to make sure that you are diverse (play down the black) so you won’t be placed in the “urban romance” section. I initially thought both Alexandra and Christina believed what Britney K. Allen said was true, so until I listened to the podcast I had beef with all three of them.

In the article, Britney who is a writer is asked by her white publisher to write an “urban romance” book. Upon Britney doing her research, (I’m going to assume she clicked in the search box on amazon) saw what popped up when she typed in “Urban Romance.” She goes on to show us a screenshot of her findings all “street literature.” These books are usually written by black authors, they tend to have drug dealers, sex, and violence in the story lines. This is the proof that amazon lumps all black literature into one category. Britney then lists the reasons as to why she will write the romance book that has to be “urban.” She grows a conscious because what she is expected to write does not properly align with what her personal “Black experiences” are. 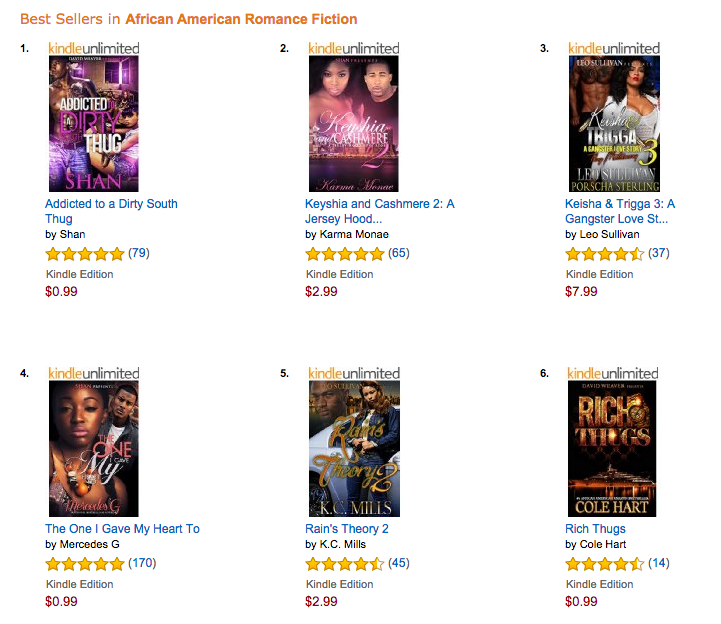 There is a stereotype of what the “black experience” is and it’s all negative. My immediate concern is when black writers, and for that matter actors, entertainers, the list goes on and on create a spectacle and yell, kick and scream when a white publisher (in this case) whose agenda is to make money off of you tells you that you need to write a stereotypical “urban” romance story. Are you surprised? Are you shocked? Do you think they care about your romantic experiences as a black person on this earth or what sells? And what irks me most is that black people in this case a black writer will go so hard to try and prove a point by having “stealth multiculturalism” (as Brittany coined herself ) story lines. Last summer, the New York Times posted their “Summer Must Reads” and not one black author made the list. Was it because black writers didn’t pump out good stories? Pearl Cleage and Toni Morrison both viewed by mainstream media as “American Writers” came out with books that summer and they didn’t make the list.

Why are black people constantly battling to fit into a society that doesn’t even consider that within the “Black Literature Section” there is contemporary romance literature, street literature, christian literature, et cetera, et cetera? The fact that these sites don’t even care enough to properly categorize your work should kinda make something click in your head. But no,  you want to battle “the man” by creating stories with “stealth multiculturalism” so maybe you can fool them and have your books not lumped into the urban romance section. It’s like coming to a dinner party that is invite only and the seating is reserved for ten people and you are the eleventh person to show up. The host never considered you so there is not enough food for you, the seating is enough for ten people to sit comfortably, the flatware you are receiving doesn’t look like the rest of the members at the table, you have a different set because you were not invited.

People have to move over and make room for you and while this may seem like an accomplishment, (people making room for you to sit) how do you feel knowing that you were never on the list or more importantly not even considered? You are fighting so hard to be heard and trying so hard to fit in just to  have seat at the table that never considered you, why? And if you did end up on the New York Times “Summer Must Reads List,” what have you really accomplished? The Black Experience is multitude of combined experiences that make up who we are as a people, the “hood experiences” and the “black elite” ones are both included. And yes, I do believe that because I am a black woman there are certain experiences no matter the socioeconomic status that I will most certainly have in common with other black people, simply because we are black. As a black writer there are certain situations that will arise because you are black no matter how white inclusive or stealth you try to be when creating your multicultural story lines.

You want to know why amazing black writers are so amazing? Because they create their own worlds. A black writer can write and rewrite the black experience and what it means to be black. Yes, there are stories by black authors that include money, sex, drugs, and violence, and guess what, the writer may or may not have experienced those story lines first hand. I can write about black millionaires all day and that won’t be my personal experience, but because I have talent (major key, DJ Khaled voice) I can do that. And for the reader that WILL be apart of the black experience, because my characters will be black. Black romance, healthy black relationships, healthy black family bonds, and structures are apart of the black experience. You can have a love story where the male lead and the female lead characters are in love and they are both black…I promise you can. And guess what? That is also apart of the black experience. It’s all relative, the good experiences and the bad ones. There is no one type of black person no matter how much the media tries to tell us different. You don’t have to “diversify” your stories by playing down the black or falsely writing outside your comfort zones of blackness. Black people read all genres, but if black writers keep trying to fit in then our black experiences in books will most certainly look identical.

Previous: Arthur A. Schomburg #BlackHistoryMatters
Next: The Secret To Achieving Your #2016Goals