The British LGBT Awards is an award show that serves to commend LGBTQ+ celebrities and icons for their achievements in media, entertainment, activism, and the like.

This year, similar to the movement of boycotting the Oscars for their lack of People of Color nominations, members of the LGBTQ+ community are boycotting the British award show for the majority of non-LGBT nominees.

Categories for the awards include ones such as Sports Personality, Media Moment, LGBT Celebrity, LGBT Celebrity Rising Star, and the two holding the most controversy: Straight Celebrity Ally and Music Artist of the Year.

These categories have been the most talked about and are what sparked the boycott. Many feel that the Straight Celebrity Ally category doesn’t hold any real worth in this award show and for what it means to this community, being that there really are no prerequisites in order to win the award. No extreme points of activism, other than public support of the LGBT community are necessary to win this particular award. So far, the most likely to win is Youtuber Zoella, who is only in the running for being close friends with famous gay icon Tyler Oakley.

The other category that has been problematic for this award show is the Music Artist of the Year award. People are outraged at the fact that half of the nominees are straight artists, including Adele, Zayn Malik, and Little Mix.

Members of the LGBTQ+ community have taken to Twitter to express their opinions on the award show: 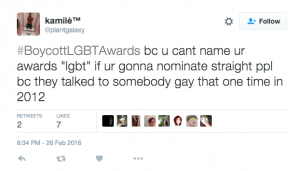 The official site of the British LGBT Awards released a statement in response to the recent outbursts: “As part of our ongoing commitment to diversity and inclusion, the British LGBT Awards accepted public nominations in this category, regardless of their sexuality, gender, ethnicity, disability, age, education, race, and religion.” In other words, it was up to the public to vote and nominate for these celebrities, but the community is still, and rightfully so, very unhappy with this outcome.

The award show will be held on May 13 in London; whether you choose to take part or not is ultimately up to you of course, but I believe it is important to recognize the injustice that is occurring here in a place that is supposed to be the most accepting for members of the LGBTQ+ community, and yet again, isn’t.

To cast your votes, visit the official awards website here.