Despite a loss in the New York Primary, Bernie Sanders is still campaigning diligently to become the 2016 Democratic nominee. Front-runner Hillary Clinton secured her hometown win, but it wasn’t by a landslide.

Clinton beat Sanders by 16% of the popular vote. She picked up support from 139 delegates throughout New York State.

Hillary’s win came from her sweep of all five New York City boroughs and surrounding areas, like Westchester and Rockland counties. She also gained the support of the cities Buffalo, Syracuse, and Rochester.

Both Sanders and Clinton were born and raised in New York, but Clinton’s years as a New York Senator put her on top. However, the Vermont Senator won the majority of the counties in New York. 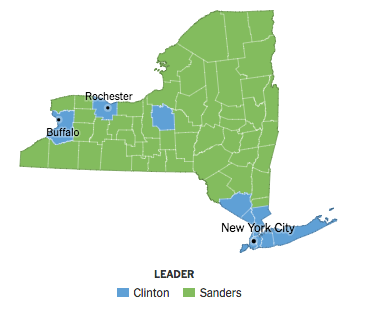 The majority of Bernie’s supporters live upstate, where he dominated the polls in over 40 counties. Sanders won the furthest upstate counties of Franklin, Clinton, and Essex counties by over 70% of the popular vote. He also managed to gain 108 delegate allies, only 21 less than Clinton.

Realistically, Bernie cannot afford another loss. He must gain over 50% of the remaining delegates’ support. In a recent interview on NBC’s “Meet the Press,” Sanders stated that his campaign was on a “narrow path to victory.”

Sanders is most certainly not going down without a fight. Bernie is one of the most talked-about political figures at this time, due to an incredible social media presence in order to wrangle millennial support.

Two of the most pivotal primaries are coming up this Tuesday, April 26th in Pennsylvania, followed by California on June 7th. Pennsylvania has 210 democratic delegates and California more than doubles that number with 546.

These two primaries will make or break Sanders’ shot at the 2016 Presidency. Although Clinton is expected to win in Pennsylvania, a sweep for Sanders in the remaining states and California could turn the tables.

Previous: Tampon Tax in New York Will End
Next: ‘Game of Thrones’ Returns