HAPPY PRIDE EVERYONE! And what better way to celebrate than to make gay marriage legal across the nation? Yes that’s right, this Friday morning, June 26, 2015 is a day that will go down in American history as the day that the Supreme Court finally ruled equal marriage rights for the gay community, something we have been fighting for, and now won.

The Supreme Court ruled five to four that the Constitution allow same-sex couples the right to marry no matter where they are or where they come from in our United States. It’s about damn time! People are calling this “the most pressing civil rights issue of modern times.”

Justices Stephen G. Breyer, Elena Kagan, Ruth Bader Ginsburg, Sonia Sotomayor, and Anthony Kennedy joined together in the ruling as the court’s liberal justices; Kennedy stating in his majority opinion: “Under the Constitution, same-sex couples seek in marriage the same legal treatment as opposite-sex couples, and it would disparage their choices and diminish their personhood to deny them this right.” That’s what we’ve been saying the whole time! Glad to see we’re all finally on the same page here.

President Obama stated at the White House Rose Garden that “this ruling is a victory for America. This decision affirms what millions of Americans already believe in their hearts. When all Americans are truly treated as equal, we are more free.” Yes Obama.

The scene was reportedly crazy outside the Supreme Court with a rally of pride supporters celebrating the victory they have been working so hard toward, waving their rainbow flags as high as they could. 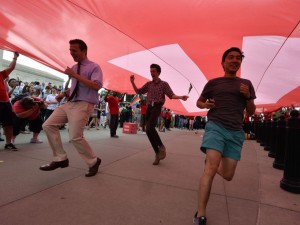 Jim Obergefell, the very person of the case Obergefell v. Hodges, where he was fighting to put his name on his husband’s death certificate as the surviving spouse, said: “It is my hope that the term gay marriage will soon be a thing of the past, that from this day forward, it will be simply, marriage,” and that, hopefully, is was we won today.

I hope you all have a wonderful, prideful, beautiful day today! Love is Love!

Previous: “Ex Machina” Review
Next: Highlights from the 2015 BET Awards