New hip-hop musical Hamilton has been awarded The Edward M. Kennedy Prize for Drama Inspired by American History. Columbia University states that the award for best historical drama is given annually “to a new play or musical of merit that enlists theater’s power to explore the past of the United States, to participate meaningfully in the great issues of our day through the public conversation, grounded in historical understanding, that is essential to the functioning of a democracy.”

Lin-Manuel Miranda, the creative mind behind Hamilton tweeted his gratitude. The Kennedy Prize is one of the greatest awards given for dramatic writing. As both the composer and the star of Hamilton, Miranda was recently awarded a genius grant by the MacArthur Foundation, an incredible honor for his reimagination of the often forgotten, yet imperative, story of Alexander Hamilton. 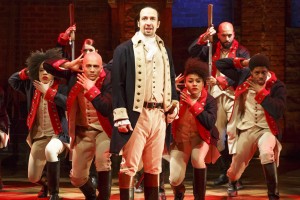 Miranda is greatly known for his fusing of important issues in cultures of both the present and the past through traditional storytelling mechanisms with contemporary music and vocal style, which are all present in his new musical. Who else would’ve thought to combine hip-hop beats with the historical story of one of America’s Founding Fathers?

Hamilton will most likely sweep the Tony Awards, coming up this June, and just last week earned a Grammy for Best Musical Album.

The cast performed on the Grammy Awards via telecast at their usual home in the Richard Rodgers Theater in New York City. When the winner of Best Musical Album was announced, the audience in the theater gave a rousing standing ovation.

Lin-Manuel Miranda proceeded to storm the stage with his Hamilton team and rapped another genius verse – an acceptance speech that honored his cast and designers, family, and artists who have inspired him, such as Biggie Smalls, Tupac, and Kendrick Lamar.

With Hamilton‘s incredible success, tickets will now be increasingly impossible to grab.