I Stand With Kesha

The 28 year old singer says shortly after her 18th birthday Dr. Luke drugged her with a pill which made her black out and then raped her, but he was never criminally charged.

In response to this case, Sony has offered Kesha the opportunity to work with a new producer, but Kesha’s defense lawyer, Mark Geragos, argued that Sony’s promise was fanciful because the company will not promote her music without him being that they have more invested in Dr. Luke and would do anything to protect him.

Dr. Luke and Sony are also trying to dismiss the underlying case that he abused Kesha emotionally and psychologically for over 10 years by arguing that the “allegations were assorted solely to extort money and gain contractual leverage.”

The legal battle between Kesha and Dr. Luke has been ongoing since 2014 when she initially sued Dr. Luke for sexual assault. Back in December, fans started an online petition urging the court to grant Kesha’s injunction to leave her contract and release music with another company. Earlier this month, a New York judge dismissed the lawsuit between Dr. Luke and Kesha’s mother.

By the end of yesterdays case, the judge ultimately ruled that letting Kesha free would undermine the state’s laws governing contracts. “You’re asking the court to decimate a contract that was heavily negotiated and typical for the industry.” 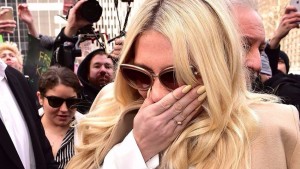 As Kesha left the courthouse, with tears running down her face, dozens of fans were there to support her with signs reading “Free Kesha Now!” Her fans have been fighting for her freedom long and hard.

I stand with Kesha and believe this court ruling to be unfair. Although there is no evidence to prove whether or not Dr. Luke did or did not sexually assault Kesha, it is ethically wrong to not only force her to continue to work with him, but to not give her the same privileges she deserves as an artist if she doesn’t work with Dr. Luke. They are forcing Kesha to work in an environment where she believes she is unsafe, and I would like to know how that is justice?

Do you stand with Kesha?
There is now a petition going around to boycott Sony products and music with about 10,000 signatures needed to meet their goal, feel free to sign it here.

Previous: Terrie M. Williams tells us how to attain “Real Power”
Next: #SupportThePuff Girls Get Suspended For Wearing Natural Hair