Celebrities skipped the Oscars for #JusticeForFlint

While celebrities gathered in Hollywood for the Oscars there were quite a few who were absent. Now unless you have been under a rock then you know about the Flint Water Crisis as well as the plan by many celebrities to boycott the Oscars because of the lack of diversity (no Black people were nominated). So instead of celebrities just hanging out on twitter being mad about #OscarsSoWhite they rallied to support and raise money for Flint, Michigan. Hollywood directors Ryan Coogler and Ava DuVernay brought together some amazing artists to host a benefit concert to raise money and awareness during the Oscars.

#BlackTwitter was there for it, while Jazmine Sullivan belted out her classic hits we all swayed as we watched the live stream on Revolt. 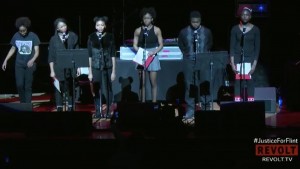 Stevie Wonder and Janelle Monae made us get up out of our seats, but it was the performances and speeches from the people who lived in Flint that made us all remember why we were here. This wasn’t a cool concert to battle the Oscars, this was to raise money for a city that was being poisoned through the water system for two years. We all joined in on twitter and Facebook to make sure people realized that while they watched their favorite artists perform they needed to text JUSTICE to 83224. Along with the amazing donations and performances 145k was raised last night. And on the social media side of things, #JusticeForFlint live stream broadcast was the second highest trend on twitter. Who got the juice now?

Of course we were here for all the tweets, some were funny and others were simply heartbreaking…

No paid promotion. All word of mouth. $122k raised tonight for Flint recovery. Thank you to all 3022 activists who donated. #JusticeForFlint

Oscar audience raises $65k for cookies. Can we raise $100k for folks poisoned by their own water? Text JUSTICE to 83224! #JusticeForFlint

Ahhhhh I'm crying now. It feels so good to be free, to be accepted for who you are and loved no matter what… #JUSTICEFORFLINT

Babies, our babies, are on stage right now in Flint, talking about how they've been poisoned by the water. It's a mess.#JusticeForFlint