Last week, beautiful people from all around the world came together to celebrate one of the most creatively inspiring weeks of the year, New York Fashion Week. For one Brit model, Leomie Anderson, things didn’t go exactly as planned. The 22 year old model went on a Twitter rampage calling out the fashion industry for the lack of diversity among beauty professionals.

After encountering yet another white make-up artist who was ill-eqiupped to work on her dark skin, Anderson went off saying, “of course I get given to the make-up artist who had ONE brown foundation she was trying to mix with white on a sly because she’s not equipped.” 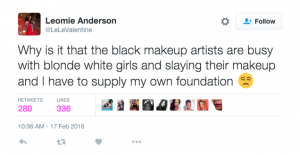 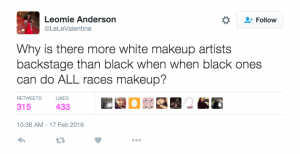 From the time she started 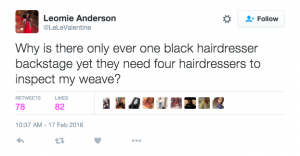 modeling at 15 years old, Anderson has always been very outspoken about colorism in the fashion industry. She has been praised for taking a stance on the institutionalized preference fashion has for white models. She even runs her own blog, CrackedChinaCup
and has continued to discuss this issue across her various social media outlets: “We shouldn’t have to feel worried sitting in the chair that we may not look out best when doing our jobs unlike our white counterparts.”

Other models of color like Nykhor Paul and Jourdan Dunn, have also vocalized their thoughts on the lack of darker color make-up for them; “just because you only book a few of us doesn’t mean you have the right to make us look ratchet; “I’m tired of complaining about not getting booked as a black model and I’m definitely super tired of apologizing for my blackness!”

None of this is to say that there aren’t make-up artists and hair dressers out there who are capable of meeting the needs of black models in the fashion industry, Anderson is just trying to have this matter recognized so that there can be more equal opportunity for all who deserve it in this already difficult industry. She ended her Twitter rant with warm messages like “big thanks to all of the publications and readers who understood where I was coming from with my tweets, I appreciate it,” and “I know for sure that there are white make-up artists who took time to learn black skin and I’m thankful for the few.”

Hopefully the exposure of this issue can bring some much needed changes.

Previous: #SupportThePuff Girls Get Suspended For Wearing Natural Hair
Next: Rihanna’s 2 in 1 video for “Work”