Facebook CEO Mark Zuckerberg recently made a public statement showcasing his support for the #BlackLivesMatter movement. If you have never visited the Facebook offices each office has the “write something” wall where employees and visitors can come and write whatever they want. The #BlackLivesMatter hashtag has made its way on the walls of Facebook offices. Instead of employees ignoring it if they don’t agree they have been crossing it off and adding “All lives matter.” The “All lives matter” movement is supposed to negate the “racism” that white people believe is associated with the “Black Lives Matter” movement. Black Lives Matter does not mean that only Black Lives Matter it means that Black Lives Also Matter. 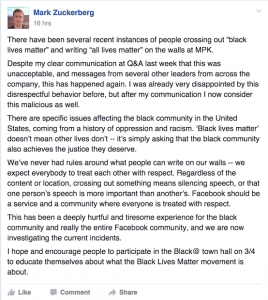 Mark made it very clear that he was highly upset and that the matter will be investigated. We might just let him off the hook with adding those annoying hearts on Facebook statuses.