Pride & Prejudice & Zombies, Lionsgate Film’s newest flick was released on Friday, February 5 – a rework of Jane Austen’s beloved Pride & Prejudice. The film is an adaptation of the 2009 parody novel by Seth Grahame-Smith, with the same title.

The new take on an old classic combines Austen’s sweeping tale of love and marriage in the 19th century with elements of popular, modern zombie fiction. The Five Bennet sisters must fight to find themselves suitable husbands, with the additional challenge of protecting themselves from an emergent population of vicious zombies. 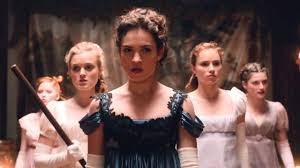 The five Bennet sisters in Pride and Prejudice and Zombies.

The film stars young, rising British actors: Lily James, who was most recently seen in Disney’s live-action Cinderella, portrays the quirky and outspoken Elizabeth Bennet. Sam Riley, known for his film Control in which he plays the tragic lead singer of Joy Division, plays her brooding Mr. Darcy.

American director Burr Steers, who has directed popular movies such as Charlie St. Cloud and written screenplays like How to Lose a Guy in 10 Days, both wrote and directed Pride & Prejudice & Zombies. In a January interview with Collider, Burr discussed introducing new elements into such a well-known story.

“The idea was to create this sort of alternate world where this pandemic has taken place and then to stage Pride and Prejudice in it,” stated Burr, “That doesn’t sound very funny, but it is [laughs], because ultimately it’s absurd, but you play it straight. No one’s playing it hitting punch lines and things like that.” 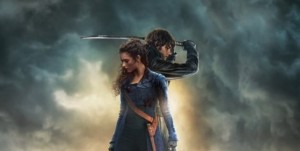 On the other hand, Sam Riley (in an interview with Independent, UK) imagines that Jane Austen would love this version, which explores a darker side beyond the frills and proper-ness of her original novel.

He believes bringing in the zombies, adding a more gruesome element to the story, would attract a wider audience that women who love romances: “There are going to be a lot of boys having to watch Pride and Prejudice, without them really realizing that we’ve tricked them into doing it – all for the fun of seeing Darcy decapitate someone.”

Despite the difference in views, should classics simply stay as they are, or is it acceptable to break traditional boundaries and reimagine?