Every been to a party where you can’t hear the DJ? And no, not because they suck or your ears stopped working, I mean a silent disco. What’s that you ask? Well recently party goers are able to individually listen to different music, while being at the same party!

Through the use of wireless headphones, you are now able to go clubbing without all of the pain and suffering that comes with it.

Back in May in the South Street Seaport of New York over 300 hundred people got to dance all night long with each other, but with three different DJ’s playing at the same time! Each DJ coordinated with a red, blue, or green color and depending on which frequency your wireless headphones were on changed the color of your headphones with it’s corresponding DJ. 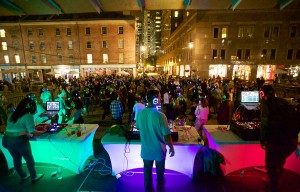 This new kind of club is great for people who hate going to actual clubs just to listen to one DJ all night or lose their sense of hearing or even their voice from all the shouting you have to do. And now when your least favorite song comes on all you have to do is change the channel!

While this kind of party is great for some people, others feel it is extremely isolating and like we as a society have become so introverted that we have succumb to dancing with ourselves. But, to each his own!

The first major silent disco originated in Glastonbury, England in 2005 when they were dealing with many a noise complaint. While it took some time, these self-dance parties eventually took off in the US, starting at music festivals like Bonnaroo and Coachella. They’ve also made their way to weddings and bar mitzvahs.

Growing in popularity, you will soon see silent discos all over like in silent party scenes in upcoming films and in your local gym at your favorite spin class.

I myself being someone who gets embarrassed easily when dancing in public am really curious to find out what it’s really like at one of these things, so who knows, maybe next time I can tell you all about my own experience! See you there!

Previous: New Video: Bitches N Marijuana
Next: Why Deep Sea Fishing is a Waste of Time