On August 9, 2015, one of the main characters, Siya, on Oxygen’s original show, Sisterhood of Hip-Hop, hosted a free meet and greet in NYC. Siya is an open lesbian rapper who is originally from Brooklyn, NY. She moved out to LA to open doors in her music and possible upcoming acting career.

I’ve thought Siya was popping from the first time I saw her on Sisterhood of Hip-Hop last summer. I follow her on Instagram and Twitter; listen to her latest mixtapes and waiting for her to release her EP in a week. It’s safe to say that I am a complete Siya fan.

So when I found out that she was hosting a free meet and greet in NYC, there was no way I could pass that up. Here I was, Sunday morning all ready to go to Soho from Queens to go meet an upcoming artist I follow before she blows up and I’ll have to pay to see her anywhere. I decided to take my cousin with me just because I wanted someone to take the picture of her and me together. However, as the day went on, I realized that inviting her was a HUGE mistake.

Everything was fine on our way to Jamaica Ave and then she told me that she’s afraid of being underground and gets claustrophobic on the subway. I reassured her that the J train mostly ran above ground throughout BK and just went underground towards Soho and the first two stops in Queens. She seemed calm after that until she had a freak attack right before we got off the train and had to leave!

At this point I’m already upset that I’m running behind schedule. I was trying to get there early enough so that I would get in and out of there just in case a lot of people show up. After we left the J train, we walked to the LIRR and got off at Penn Station. Then we took the subway for 4 stops and luckily she was fine.

So after that, we’re walking towards the shop and my cousin starts saying she’s feeling lightheaded and needs to sit down for some water. Now I know that I should be caring and be concerned about my cousins’ well being, but I wasn’t. I was furious and regretted inviting along on this outing for me because she has been nothing but a pain in the ass the entire time. So at that point I gave her the water in my bag and said to drink it and let’s go!

After shoving her the water, we finally see the shop where the meet and greet is at! To my surprise, there weren’t a lot of people waiting when I got there. There were only two groups of people there before me. After seeing that I was one of the first people to show up, I waited about 30 minutes for Siya to show up. 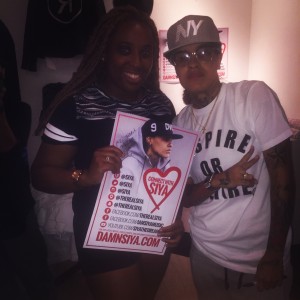 When she showed up, it was like a huge relief off my shoulders. After the stressful day I had dealing with my cousin, I was so excited when Siya came through and that I would get to meet her. She was really humble and chill and just excited at the fact that her fans showed love by coming out to support her. So even though I should have left my cousin at home, being able to meet Siya was beyond worth it!

Oh and did I mentioned that she posted a video of the meet and greet and I’m in it? Let’s check that out the Siya meet & greet. Follow her on Instagram: @Siya.