Disney’s Tangled, a story that follows the adventures of a lost princess with the most hair ever leaving for the first time the tower she called home since her kidnapping by an evil witch, is set to become an animated Disney Channel series by 2017. 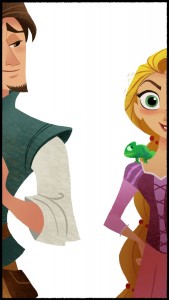 According to Disney Insider, what will make the new series so special is how much of the talent from the original movie is coming into the making of this series. Mandy Moore and Zachary Levi will be reprising their roles as Rapunzel and Eugene “Flynn” Rider. The show will also have new songs from Academy award-winning composer Alan Menken, and lyricist Glenn Slater, both responsible for the songs featured in the original film.

The series will also feature additional characters, new and old, including Rapunzel’s ride or die sidekick Pascal, the sassy but loving horse Maximus, the surprisingly sweet thugs from the Snuggly Duckling Pub and brand-new character Cassandra, described as “a tough-as-nails handmaiden, who becomes Rapunzel’s confidant.”

The show is set to take place between the time of the original movie, released in 2010, and the animated short film, Tangled Ever After, the story of Rapunzel and Eugene’s naturally crazy wedding, released in 2012.

Details about the animation style have not been released yet, but from the looks of the promotional artwork, it looks like it will be amazing, but let’s be real, no one would expect anything less from Disney.

Previous: 10 Songs That Need To Be On Every Playlist This Summer
Next: The Fine Art of ‘Netflix-ing’