The Classic Fable: “True To The Game” is going to be a movie

What happens when one of the books that literally changed the course of your life gets turned into a film? You might think I’m being a bit dramatic with my first sentence but I read “True To The Game” at a very young age. I was in my early teens when book author Teri Woods dropped the now classic fable, “True To The Game.” Much like the famous book, “The Coldest Winter Ever,” it was a hit in just about every urban community. People everywhere talked about the hood love story that was Quadir and Gena. I remember the book like I read it yesterday, it was one of those stories that stuck with me and really changed the way I viewed love and relationships as a teen. (my young mind smh).

Teri Woods life story is admirable, she wrote the book and couldn’t get any major publishers to sign on with. Then Woods decided to sell the book herself out the trunk of her car, once the streets got a hold of it…it literally blew up. Woods went on to write more books and create her own publishing company. Just like with film, we have our classics, “Love Jones,” “The Wood,” “The Best Man,” “Love & Basketball,” “Poetic Justice,” I could go on and on. They are classics and in the literary world “True To The Game” is a classic. Often when a book is categorized as “urban fiction” people try and make the work seem small or just another book about drugs and violence. And while drugs and violence is in the book it still shouldn’t take away from the project.

So when I looked on instagram and saw this I got excited…. 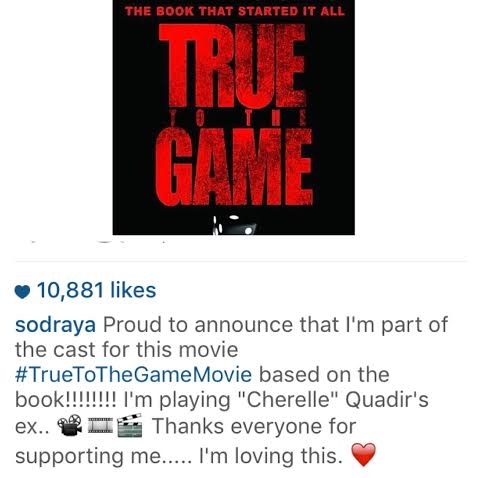 I had no clue not even a hint that “True To The Game” would being turned into a film. After Draya (Reality television star from Basketball Wives of LA) dropped that she would be in the film I started to wonder, “who in the hell will play Quadir?” That was the most important part of this entire book, some might say Gena but for me it was Quadir. I didn’t want them to mess up who Quadir was for me when I read the book, because in my head he was perfect! And then like knight in shinning armor @sirjoeexclusive came through with the tea!!!! 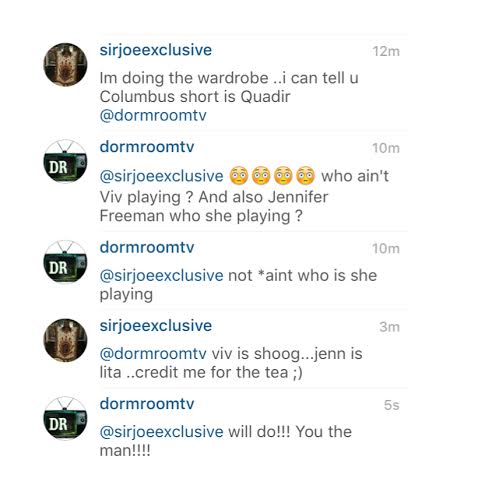 Because we were exchanging words so fast here is what that instagram convo means….actor Columbus Short will take the lead as “Quadir,” Vivica Fox will be playing “Shoog,” and  Jennifer Freeman is playing “Lita.” I am still not sure who will be playing the female lead character “Gena.” When I dropped this info to our Dorm Room Television gang they were not excited about Columbus Short playing the lead. Most of the women who spoke up in objection said the same thing, “they ruined the picture I had in my head for Quadir.” And then I got to thinking of what Quadir looked like to me and it was not Columbus Short.

While I was extremely excited about the book being turned into a film I have to admit I am not as excited about the characters in the film. But I will say this Columbus in my opinion is a really good actor and I think based on acting skill alone he might be able to pull it off. I am sure once I reread the book I will have my own version of what Quadir looks like and it still won’t be Columbus Short but I am excited about the movie….but what if it’s not good? Should classic books like “True To The Game” be turned into movies? Terry Mcmillan did an awesome job with “Waiting To Exhale,” the book and film are now classics in the literary and film world in the African American community. So it’s possible to take a book and turn it into a film and it become a hit. Terry did have an all star cast for her film (keep that in mind). We will just have to wait and see, will you be going to see “True To The Game” when it hits theaters?