The Dress That Divided The Internet

So I’m sure by now we’ve all seen this frustratingly colored dress that’s became a huge hit online within such a significantly small time. Thank you Tumblr user swiked, your new legacy is breaking the internet. It’s become such a hit, that within a few short hours of it being posted, BuzzFeed was already coming out with multiples articles about it like this and this and this. Quite an impact right?

When I first saw the dress last night, I only saw white and gold, while some of my other friends were convinced it was blue and black. It was such a divided opinion that when we were talking about this, there were six of us discussing it including myself. And literally one half of the group saw white and gold and the other half saw blue and black. At first, I figured maybe it was just a white balance issue, but if that was the case then the background would have had a bluer shade as well, so I crossed that theory off. But you can tell that the picture is taken under less-than-satisfactory lighting, so I could understand people seeing blue, especially since if you take a pixel of the dress and looked at the color of it you’ll see something within the baby blue spectrum. But “how the hell were people seeing BLACK when it’s so clearly gold?”, I kept wondering. And of course, there’s that theory that people’s screens could be tilted a certain way or the brightness/contrast settings or whatever are adjusted differently. But how did that explain the fact that my friend was looking at the picture on her phone, where regardless of screen position or image settings, we were still seeing completely different colors? That’s when someone from the internet did what I was too lazy to do and invert the picture to prove a point. Check out the comparison below: on the left is the untouched photo, and on the right is the photo with the colors inverted. 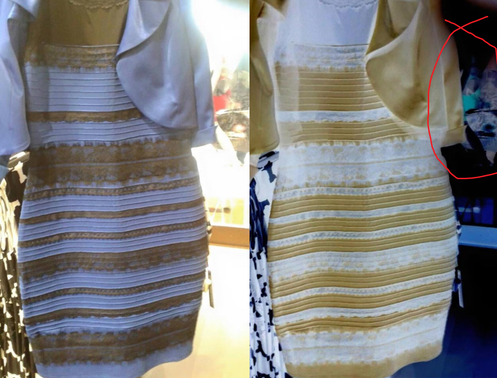 Now if you’re like me, this going to be extremely frustrating, because in both pictures, you can still see gold, but the background is clearly inverted as well, meaning there’s some wild sorcerery going on here. And to make matters even more hair-pulling, here’s what the real dress looks like: 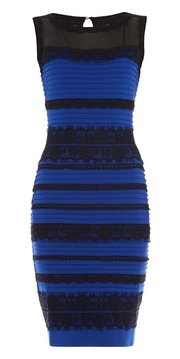 Oh, that could be any old dress right? They probably have the same one in white and gold, and this is all just a mix-up, perhaps? Unfortunately, the evidence gets more frustrating to those of us seeing white and gold: 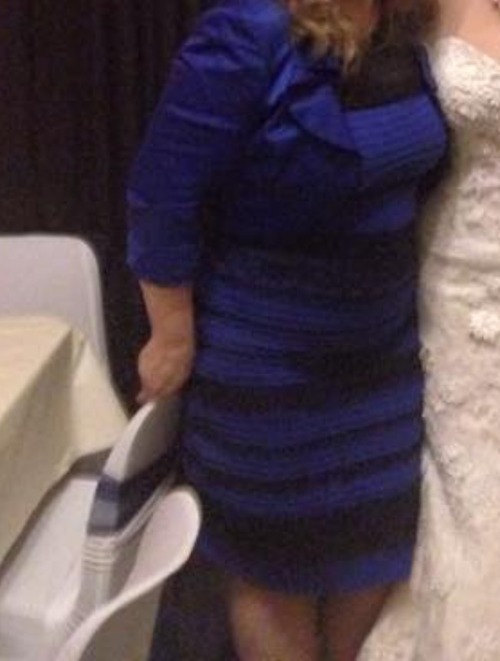 That’s the dress that the Tumblr user swiked posted after the controversy blew up everybody’s dashboard last night.
Now I’m sorry I don’t care what anyone tries to tell me, but that dress is white and gold, and I don’t care what science has to say about that dress or the way my eyes interpret light and color. If you read the third BuzzFeed article listed in the first paragraph, it’ll tell you how our eyes see colors differently due to different levels of sensitivity, and that those who see white and gold have eyes that are compensating to the photo’s bad lighting, which explains why this dress is driving everyone crazy. So basically what they’re saying is people who see white and gold have slightly worse eyesight then those who don’t (yeah thanks science). But whether or not you see white and gold, or blue and black, I think we can all agree that’s a pretty tacky dress.