I get invited to about five events a week and on average, I attend maybe two if that, one its cold and secondly people are not offering up anything new. We all need to be inspired and refueled, there are only so many “networking” events I can personally handle without gaining anything more than a business card. Call me crazy but I usually want something more to stimulate my mind Craig lol. So while trolling on the net (I troll for creative & blogger purposes lol) I landed on twitter talking to my bro Brandon who was talking to his friend about an event called “The Kick Back.” Now the term “Kick Back” where I originally first heard it from on the West Coast meant a chill out, get together, etc.

I went on the site the event was hosted by  “Hearts Converse” and decided that it might be something worth checking out. I honestly had no idea what to expect, even from watching the recap of the first “Kick Back” I was still truly unaware of how the evening would play out. The event info did say “interactive discussions on hot topics in an intimate space,” but that didn’t mean I would enjoy the crowd or their discussions. Throwing caution to the wind I purchased my $8 ticket and thought, “if this is wack at least I only spent eight bucks.”  I arrived at the event around 4pm (the event start time was 3pm discussion starts at 3:45-4pm ish).  I only knew one other person in the room which was halfway filled with beautiful people of color who all seemed to be comfortable with each other.

I made my way over to my friend Brandon and took a seat, wait back it up, did I mention the kind people at the door who greeted me and gave me a button and a card with a random number on it and told me not to loose it? (That is very important, I hate walking into an event and people push me along to take a seat without so much as a hi). Once I sat down I realized everyone was eating something even Brandon was munching, I noticed the area that had food set up (for free) if you wanted a drink then you would have to pay at the bar, but the finger foods (cupcakes, candy, and wings) were enough to make anyone smile. I looked around and everyone was engaged in small talk, I happened to hit my neighbor next to me and that led to making introductions (I love my new friend Danny!). 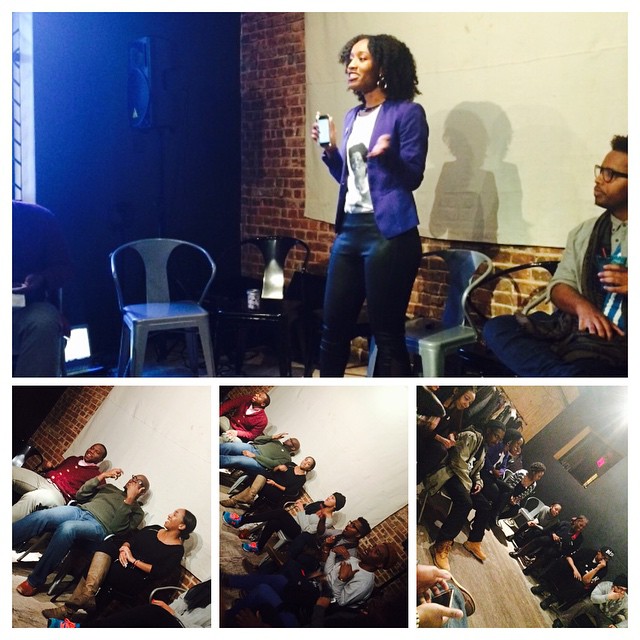 The music quieted and the owner and creator of Hearts Converse Natelegé Whaley introduced herself and the night began. Natelegé began first by placing little candies in three chairs set up behind her, she then told us to take out the small cards we were given upon arriving in the room. After she called out three random numbers the chosen people would be placed in the “hot seat.” These three people would start off by answering the questions and then the room would then keep the discussion going. There were three questions for each round. Of course my number was called, I took a seat in the hot chair and kept my little candy. I was nervous, what would be the first question? It was as if someone said “Sharee, because you don’t know anyone allow me to introduce you to everyone with this question” lol. The question was about cultural appropriation, in the beginning I didn’t respond right away but then a girl with lovely hair also placed in the hot seat began and because I disagreed with her I naturally spoke up.

3. Relationships: When considering a situation (love/lust) do you communicate your intention? If so, how? If not, why not? 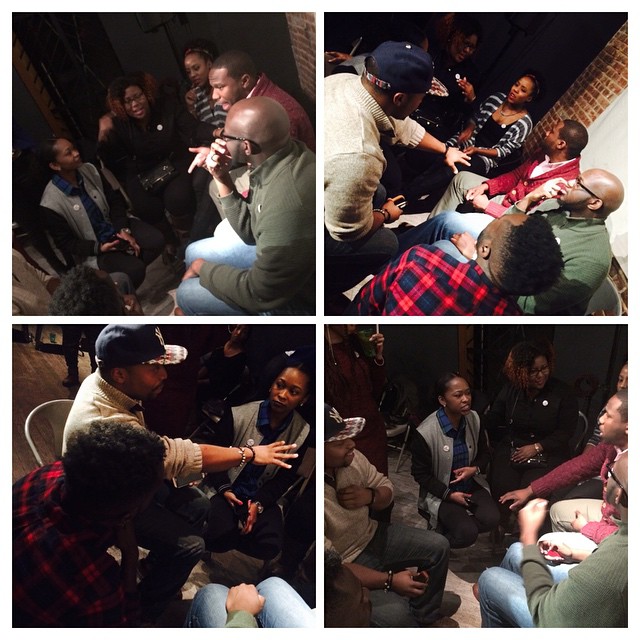 The night was filled with thought provoking conversation and even the questions created questions. The day turned to night and we spoke passionately and even argued about how we felt but it was all with love. Young professionals of color from every field gathered in a space to speak about real and relevant topics. At one point I forgot these people were strangers because they felt like my friends who I often call or link up with to talk about these very topics. The environment was chill and intense all at the same time, if an outsider looking in didn’t know any better you might think we were in a screaming match, but once they listened they would quickly understand that passion was present and demanded to be heard.

“The Kick Back” will have you seated listening in and before you know it you’re standing letting everyone in the room know why sending a “good morning” text is misleading when you just want a “friend with benefits.” You throw shyness to the wind because you don’t agree with what homeboy to the left of you is saying about protesting and demonstrations being pointless. You nod your head and even high five someone across the room because they took the words right out of your mouth. You accept that you disagree with the girl sitting right next to you but still admit that her points are valid. Our disagreements lead to us talking about an array of other things, and we realized we have more in common than we think, so exchanging social media handles in between talking about the good chicken becomes second nature. The room is a safe space where right and wrong truly does not exist, but thoughts and opinions run freely creating room for inspiration, new ideas, and even new relationships to form.

I walked into “The Kick Back II” expecting nothing more than some conversation and maybe to hand out a business card or two. What I got was so much more, in a world where young people of color are begging to be heard Hearts Converse created an event that says, I see you, I hear you, and what you say matters. It was a memorable event filled great conversation and lots of laughs, make sure you follow Hearts Converse on twitter so you can attend the next kick back.

P.S Check out the event recap of the first “Kick Back” hosted by Hearts Converse