Theodore Howard was an African American surgeon, businessman and activist.

Born in Murray, Kentucky, Theodore Roosevelt Mason Howard was the son of to Arthur Howard, a tobacco twister, and Mary Chandler, a cook for Will Mason, a prominent local white doctor. Mason took note of the boy’s work habits, talent, ambition, and charm. He put him to work in his hospital and eventually paid for much of his medical education. Howard later showed his gratitude by adding Mason as one of his middle names. Howard attended three Adventist colleges; the historically black Oakwood Junior College in Huntsville, Alabama, the then nearly all-white Union College in Lincoln, Nebraska, and the College of Medical Evangelists (now Loma Linda University) in Loma Linda, California. While at Union College, he won the Anti-Saloon League of America’s national contest for best orator in 1930.

During his years in medical school, Howard took part in civil rights and political causes, including writing a regular column for the California Eagle. He was also the president of the California Economic, Commercial and Political League that championed Black business ownership, and the study of Black history and opposed local efforts to introduce segregation. In 1935, he married Black socialite Helen Nela Boyd. After a residency at Homer G. Phillips Hospital (in St. Louis, Missouri), Howard became the medical director of the Riverside Sanitarium, the main Adventist health care institution to serve Blacks.

In 1942, Howard became the first chief surgeon at the hospital of the International Order of Twelve Knights and Daughters of Tabor, in Mound Bayou, Mississippi. While there, he founded an insurance company, restaurant, hospital, home construction firm, and a large farm. He also built a zoo, a park, and the first swimming pool for Blacks in Mississippi. In 1951, Howard founded the Regional Council of Negro Leadership, which mounted a successful boycott of service stations that denied restrooms to Blacks. Howard moved into the national spotlight after the murder of Emmitt Till when he became heavily involved in the search for evidence and made his home the command center for witnesses and journalist. In late 1955, Howard was forced to move to Chicago due to death threats and economic pressure. There he founded the Howard Medical Center and served for one year as president of the National Medical Association. 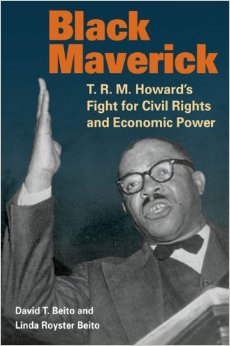