Violence at Trump Rallies Up

Donald Trump’s supporters praise him for his political bluntness and ability to “tell it like it is”, but have taken shocking lengths to back his campaign. A seemingly endless amount of violent and clearly inhumane acts have taken place at pro-Trump rallies across the United States.

On Friday, March 11th, the leading Republican candidate had to postpone his rally in Chicago after thousands of protesters stormed the grounds and threatened to take over the event. After consulting with authorities following mass fist fights which happened in the area at the University of Illinois broke out, Trump called off the event. 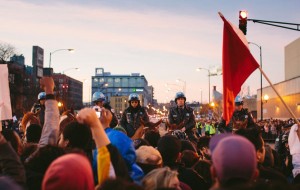 Police outside the University of Illinois for the Trump Rally. Photo Credit to The NY Times.

The day after when Trump was speaking in Dayton, Ohio, a young man took to the stage while Trump was speaking. The secret service immediately jumped into action, forming a circle around trump, and the man was escorted from the rally. After the event, Trump tweeted that the young man “has ties to ISIS. Should be in jail!” along with a video of the event set to jihadi music. The video was a hoax.

Even more recently, a rally member in Tuscon, Arizona was arrested last night for repeatedly punching and kicking a non-violent protester.

The Apprentice ex-star’s rallies and campaign events have led to more violence than any other political campaign in history. Protesters have been consistently boo’d, forcefully removed, or physically harmed by Trump supporters, with an increasingly higher rate of hate shown towards women and people of color.

Trump has openly stated that he would like to “punch that guy in the face”, speaking about a protester, and that he will pay the legal fees for anyone who commits a, in his mind, rightful act of violence against someone protesting his event.

Writer, comedian, and the host of HBO’s Last Week Tonight, John Oliver, believes that “a Trump rally being canceled due to violence is the most predictable things to happen in this campaign.” After refusing to talk about him for months, he dedicated an episode to discussing the lies and immoralities of Trump’s campaign.

At the end of the episode, Oliver ends the 22-minute segment on a lighter note, adding that Trump’s ancestral name was once changed to “Drumpf” before pulling away a curtain to reveal “DRUMPF” in bold, glowing lights. #MakeDonaldDrumpfAgain has been a top trending hashtag on Twitter.
Oliver, as well as many other political and non-political figures, urge voters to remove the humor behind Trump and see the violent, hateful events that are occurring due to his campaign.