Rapper Zoey Dollaz hails from Miami and has been making some noise for quite some time now. If you follow me on #snapChat then you know I listened to his recent mixtape “Who Don’t Like Dollaz” in which I already have my favorites. His sound is hard but his beats give his music an old classic hip hop feel. For instance the intro to “Hottest In The City” produced by Kasanova gives me a classic hip hop beat one that while its fresh lets me know Zoey understands the value of classic hip hop. Zoey Dollaz also has a track for the ladies, “Anything ft. Ronnie Vop,” I absolutely love the track, its something to ride out to while cruising with “bae.”

But don’t think he is just some soft Miami rapper because he clearly lets us know that’s not the case with tracks like, “Wish U Would” and “IDK” ft. Kasanova he goes from 0-100 real quick. The mix tape captures productions from Smash David and Kasanova. Jim Jones also makes an appearance on the track, “How you feel.” Check out the mix tape below… 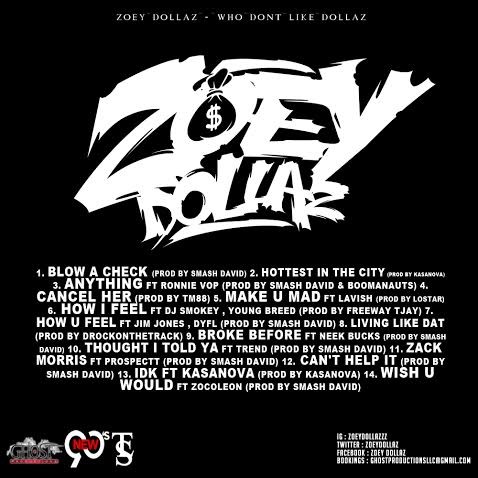 Bonus: Check out Zoey Dollaz video for “Do Me” below…

Make sure you keep up with Zoey Dollaz on the web